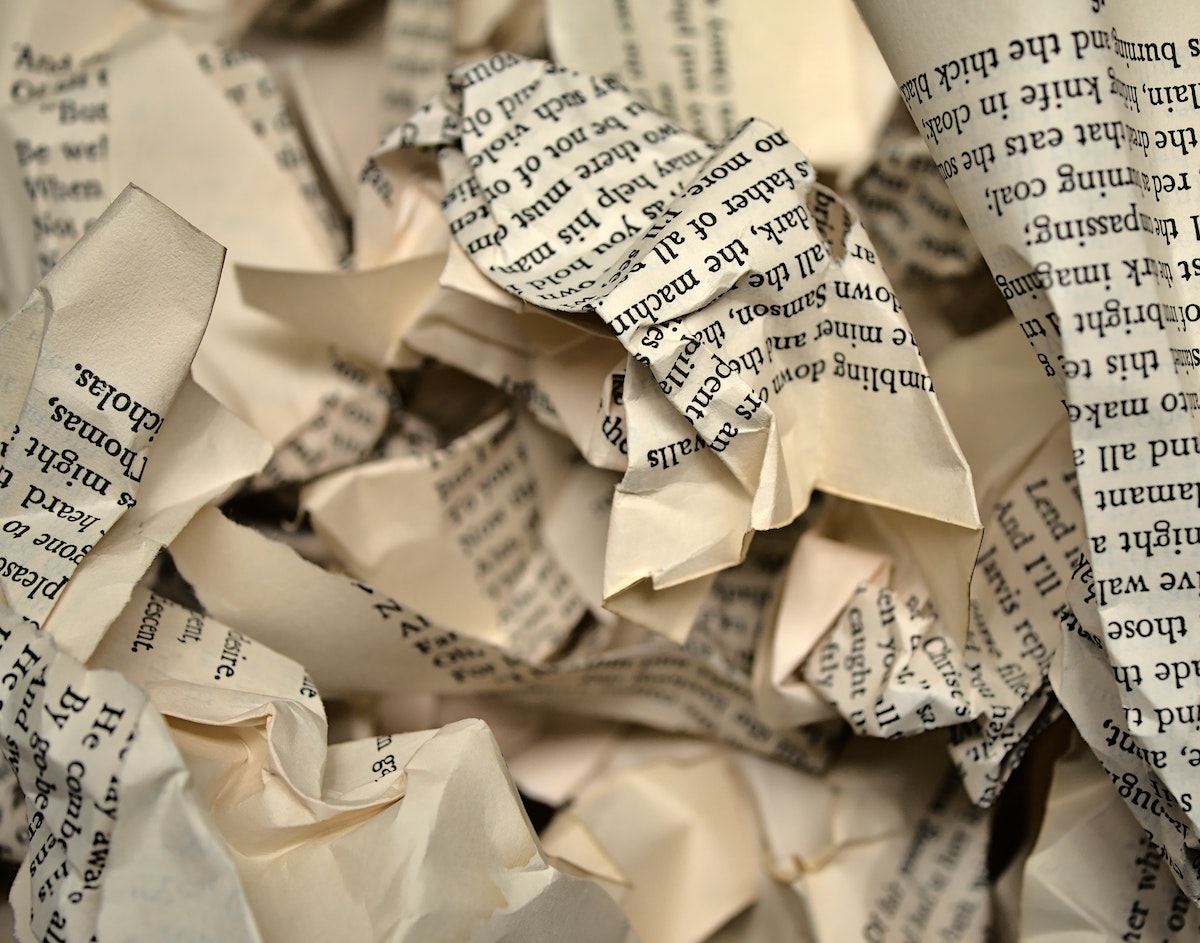 Don’t kill your darlings: What writers do with the things they cut

How to rescue your darlings

Then as you’re proofreading, you’ll hit something unique, something you love, but something that doesn’t quite fit in this piece. Something that will distract readers from your main point. You know you should cut it. But it sounds so good, it hurts to delete it forever. Maybe you’ll never think of such a clever turn-of-phrase again.

Nope, said Stephen King in On Writing. “Kill your darlings.” Cut those extras, no matter how great they might seem.

“Whenever you feel an impulse to perpetrate a piece of exceptionally fine writing, obey it—whole-heartedly—and delete it before sending your manuscript to press,” said Arthur Quiller-Couch a century ago, in the original take on King’s advice. Just because you think your baby—or writing—is cute doesn’t mean everyone will fall in love with it. Thus the advice to cut ruthlessly. The most lovable prose is the most dangerous.

Even the best writers waver. What if such a drastic step isn’t needed? What if those darlings were actually good ideas, just a bit premature for what you’re writing today?

So while interviewing writers about how they proofread, I also asked what they do with the things they cut. All 15 writers do one of three things: Move cut sections to the end of the document, start a new document with the best cuts, or delete without mercy.

Move extras to the end.

That’s why so many writers move cut sections around, first, just in case they come in handy later. The bottom of the doc seems the most common place to dump your clippings.

“I dump them at the bottom of the document until I'm sure the piece is done,” says Zapier editor Deb Tennen.

“I usually create a ‘piggy bank’ at the bottom of anything I write so I at least have the option to pull from there,” says Notion content lead Nate Martins.

“I have a separate section of ‘Things cut’ at the end of the draft in my Google Doc version,” says freelance writer Rochi Zalani. Then, if a client asks for more, “I don’t lose the work and have something ready for them quicker.”

The same goes for books and other longer writing projects, where the chances you’ll need things you cut are higher “Sometimes, though, I put a little area at the bottom of a document, or a special document for overflow,” says author Andy Welfle. “When we were writing Writing is Designing, the chapters that I primarily wrote would have a separate document for bits and pieces that I cut out. And sure enough, a couple of times it came in handy because it fit better elsewhere.”

Cut sections don’t have to go at the bottom of the document; depending on your writing app, they could live alongside your core writing. “When I'm writing a short piece, like a blog post, in OneNote, I cut pieces and move them to the side of the main text box, just in case I want to add that back into the story later,” says Melanie Pinola.

And while you'll typically delete those cut sections from the bottom of your document before publication, you could save them into a new document or, perhaps, publish them as outtakes of sorts. That's what Philip Pullman did in the His Dark Materials series, pulling cut scenes from each book together into a coda he called "Lantern Slides" that shine a bit more light on the characters in the book.

Then come the really big ideas, the sections you cut that seem to have a life of their own. You find you’ve written a sub-novel inside your novel; perhaps it deserves to get published, too, just not as part of your first work.

Cuttings can be more than just a throwaway sentence. “Sometimes they’re the genesis for another piece, like a kernel of an idea,” says Notion’s Nate Martins.

And when they’re that good, they deserve more than the cutting floor. “If an idea is big enough to be its own piece, I add it to a list of topics I'd like to write about,” says Atlassian marketer Peter Peterson. “Sometimes these ideas don't fit what I'm writing today, but could be something fun to dig into later.”

“Sometimes I’ll find a sub-section that I realize could be an entire post,” says developer marketer Adam DuVander. “In that case, I’ll copy it to a new document, then trim the section down in the original doc.”

With this mode of editing, you’ll delete by default—but then stop and save if something’s good enough to invest more time into later. “I usually delete stuff,” says Justin Pot, “unless I think it might make a good article in and of itself, in which case I'll make a new document to save them.”

Keep ideas around to reuse later.

Or, perhaps, you’ll have something that might be worth referencing later. Not exactly enough for a standalone article, but a detail, a bit of info, a quote or phrase that could add color the next time you’re writing. Today’s scraps might be the missing link tomorrow’s story needs.

That’s what freelancer writer Rochi Zalani has found. “Things I’ve cut in one article may be helpful for another,” says Rochi.

Storage is cheap; you could save a copy of Wikipedia’s text to any modern computer with plenty of space to spare. Your clippings won’t take up too much space if there’s any chance you’ll use them.

“I keep almost everything I cut because there's always a chance it can live on in another piece,” says Melanie Pinola of her writing. So she keeps a cut folder in her writing app, Scrivener, and can bring bits of writing back to life anytime.

Matt Gemmell feels the same with the content he cuts from his novels. “I copy the relevant scene to the Deleted Scenes folder I create in each project, and they stay there forever,” says Matt. “Sometimes they’re useful in the future. I’ve had scenes that I cut in one book being useful in another, even.”

Arpit Choudhury finds his document filled with cut sections comes in handy far quicker, while running a forum and email newsletter about data tools. “My posts are related to each other so the bits that don't fit into one often fit into another,” says Arpit.

And the ideas themselves may end up being helpful later, even if the words themselves don’t get used. “I keep things I cut in mind always, but more often than not they don't get used,” says Vancouver Tech Journal editor Nathan Caddell. “Sometimes they can help for context with similar issues.”

It's not just individual writers who have found it helpful to keep ideas around. Entire writing teams—including producer Mike Schur's The Good Place team, keeps cut jokes and ideas around in what he calls "The Candy Bag." It's a far less stark term than The cutting floor, and perhaps makes writers feel safe cutting ideas knowing they can be pulled back, that if anything their ideas are still seen as valuable as candy.

Or, you could just delete.

Peter Peterson gives cut sections a brief reprieve first, then deletes. “If it didn't make the cut today, it's not allowed to stick around for tomorrow,” says Peter.

Adam DuVander does the same. “I’ll move sentences and paragraphs to the bottom of the document temporarily,” says Adam of his cuttings section. “They either get moved back to another section or removed forever when I finalize the draft. No mercy!”

The Next Web editor Abhimanyu Goshal grants a few final words before deleting. “I generally comment on bits that I want cut, with a brief explanation as to why,” says Abhimanyu.

Others are quicker to cut.

“When I cut sections, I just remove them,” says Transistor co-founder Justin Jackson.

“Sometimes if I’m feeling ruthless, I delete them forever!” says Andy Welfle (though he reserves the cutting floor for the times he’s feeling less ruthless). His Writing is Designing co-author, Michael Metts, seconds the strictness: “Hopefully I move on with my life,” says Michael.

And you know what makes deleting easier? Backups.

You can delete with abandon when you know, deep down inside, that you could always bring prose back from the dead if you need to.

That’s how Justin Jackson feels about cutting things from his website. “The nice thing is anything I cut off the website gets recorded in GitHub, so we always have a record of what we've removed,” says Jackson. That works if your site’s copy is hardcoded, if every bit of writing is committed to your repository. Or, if you’re writing in plain text on your computer, you could jump back to a previous version from your built-in backups. Or, if you’re collaborating on text in Google Docs or Microsoft Word, or syncing your article copy to Dropbox, you can always roll back to a previous version.

Odds are you won’t bring stuff back from your backups. They’re far less accessible than a cuttings document. But you could undelete if you wanted to.

And that makes it feel safe to cut.

The knock-on effects of getting to the front page of Hacker News.

"Write it fast, then read it out loud a few times."