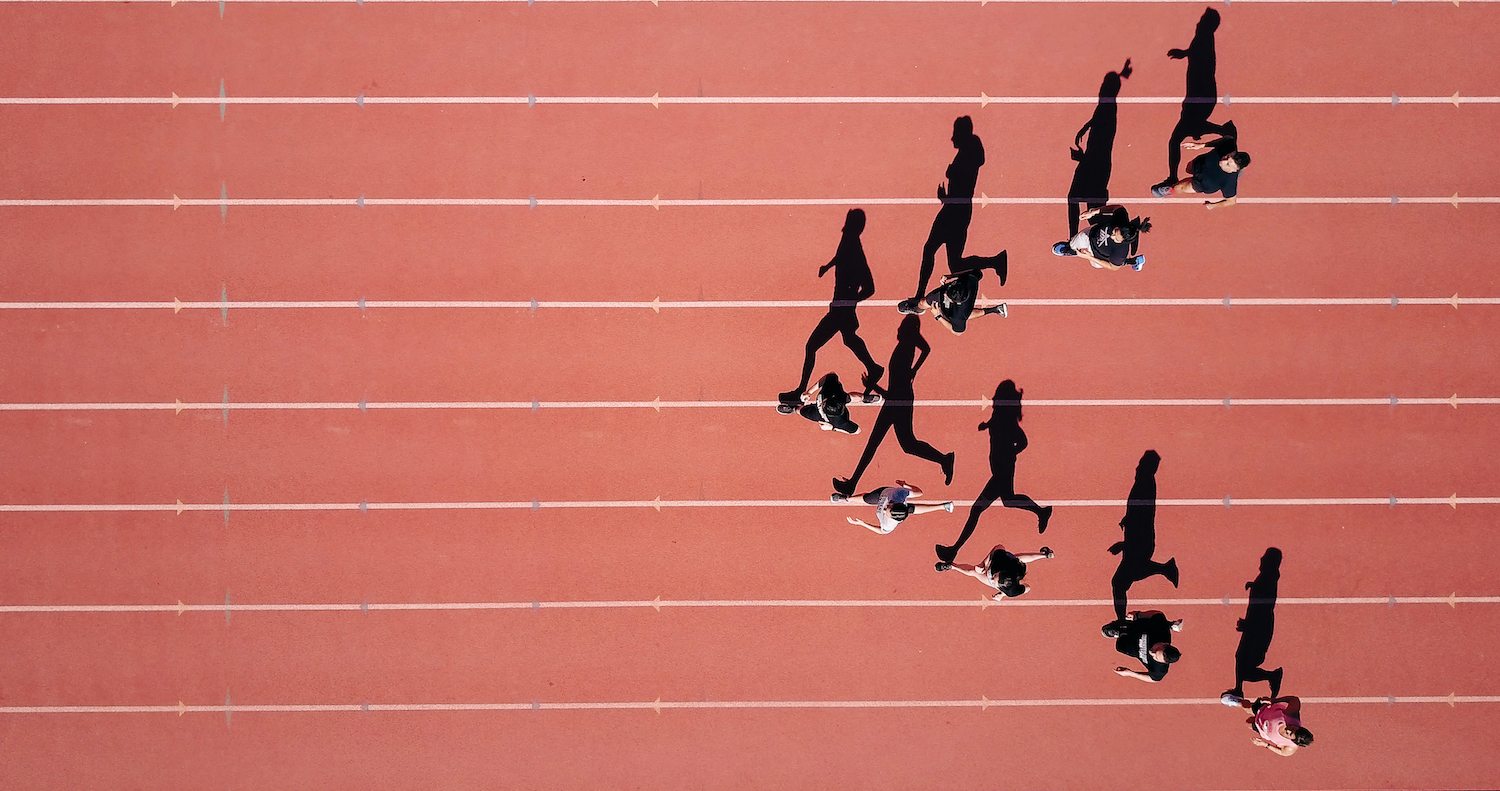 On OKRs and the art of setting unobtainable goals

In the pursuit of the impossible.

Goals we understand, almost intuitively, from childhood. We’re imitators, repeating what we see others do until we, too, can do it. One foot in front of the other, falling until we figure out how to walk then run. Babbling unintelligible sounds until slowly, some semblance of language breaks through. We learn that with time and effort, anything anyone else has done is possible. We can run a 5k, make the swim team, pass an exam even if not with flying colors. We can put in our thousand hours and become an expert, or moderately ok with less effort.

We breeze by, at first, cheered on at every accomplishment. Your first step is worthy of a round of applause, of telling everyone around that you’re a good kid. But soon enough, disappointments pile up when we realize we can’t get first place on that 5k or that sometimes it’ll take real effort to even pass an exam with a C. So we lower our sights, set more obtainable goals, ground ourselves with our baseline of accomplishments and try not to bite off more than we can chew.

Walking’s fine, if running’s too hard.

Which is the hardest thing about OKRs, Objectives and Key Results, the goal-setting strategy pioneered by Andrew Grove at Intel and in High Output Management, promoted by John Doerr through VC firm Kleiner Perkins and in Measure what Matters, then popularized by Google and Christina Wodtke’s Radical Focus. You set an objective (a significant goal) and key results (individual, quantifiable sub-goals that will get you to the objective).

Only, where do I want to go is likely to be something big. Unobtainable, perhaps, at least today, and we’ve trained ourselves to set obtainable goals, things that are easy to hit. OKRs call for lofty objectives, things we’re only likely to nearly miss. “The ‘sweet spot’ for an OKR grade (how well you accomplished your key results) is 60% – 70%,” shares the Google team in their guide to OKRs. “If someone consistently fully attains their objectives, their OKRs aren’t ambitious enough and they need to think bigger.”

We’ve been trained our whole lives to hit our goals, and here’s a management philosophy setting us up to fail, telling us that losing is the only way to win.

“Conservative goal setting stymies innovation,” writes Doerr about why OKRs need to aim so high. And yet, he also writes that “When a goal is too aspirational, it’s bad for credibility.” Thus Google’s sweet spot of getting 70% of the way there.

It’s backwards, doublethink, something entirely hackable by listing what’s possible, adding 30% to it, and calling it a day.

Ever had a huge deadline dumped on you at the last second, so you poured everything into it and … missed the deadline but still got a massive amount accomplished? Maybe you realized all too late that the end of the year was rapidly approaching, that if you were going to do something it had to be now, and pulled out all stops to get there?

That’s how our team’s past month went. Without setting an OKR, as such, we decided to do a big launch on November 1st, as the last window before the holidays. We went out and said it, publicly, told people what we were building towards.

We ran. Worked faster than the two months combined. Published more effective content that brought in more readers than we expected. Fixed bugs that’d daunted us for months. Got feedback from advisors we’d forgotten to lean on. We took on more than was reasonable, emailed people, wrote guest posts, went on podcasts—everything in pursuit of the objective. We hit key results along the way—not all of them, mind you, but more than we would have thought to attempt if it weren’t for that objective. Those key results, if anything, were the easiest to hit, the milestones along the way that let us know we were making solid progress, while the amorphous objective was out there in the distance.

And we didn’t hit it, maybe didn’t even get 70% of the way there. It was too much, too soon, and advisors had helped us consider changing course regardless. But it wasn’t a waste. Far from it; it was our most productive month in months. There was an energy in trying to pull off the impossible. You’d hit the mile markers along the way and keep going towards the next one; the final goal might feel overwhelming but the next mile still feels achievable.

Maybe that’s the genius of NaNoWriMo asking you to write a thousand words a day for a month, of the Ironman Triathlon asking you to swim 4km, bike 180km, and run 42km back-to-back. “Brag for the rest of your life,” offered the original Ironman invitation as the reward for your pain, and somehow one imagines you’d still have a story to tell, even if you didn’t make it across the finish line.

As Doerr quotes Google CEO Larry Page on OKRs: “If you set a crazy, ambitious goal and miss it, you’ll still achieve something remarkable.”

But maybe that’s the trick: You have to actually believe you might be able to do it, as crazy as it sounds. If you go into an OKR knowing that 70%’s ok or start a marathon feeling like even running 10k would be an achievement, you’ll never have the energy to get anywhere near 70%, let alone the finish line. You have to set too high of a goal and really attempt to hit it. And if you do, if you know that you set an actually ambitious goal where 70% would have been really good but you managed to actually pull it off, then celebrate. There’s time later to analyze and see if, perhaps, you could have been even more ambitious, if you were sandbagging your goals or if somehow you managed to catch the wind in your sails and do more than you expected.

But if you do it, if you run that marathon and hit the goal, reward that part of your brain, as a kid, that learned you can’t always hit goals. And if you don’t hit it, hey: You’ll accomplish a heck of a lot more than you expected along the way.

Email is the most accessible API

Somehow email brought us web 2.0's promise of interoperability and made it work for everyone.