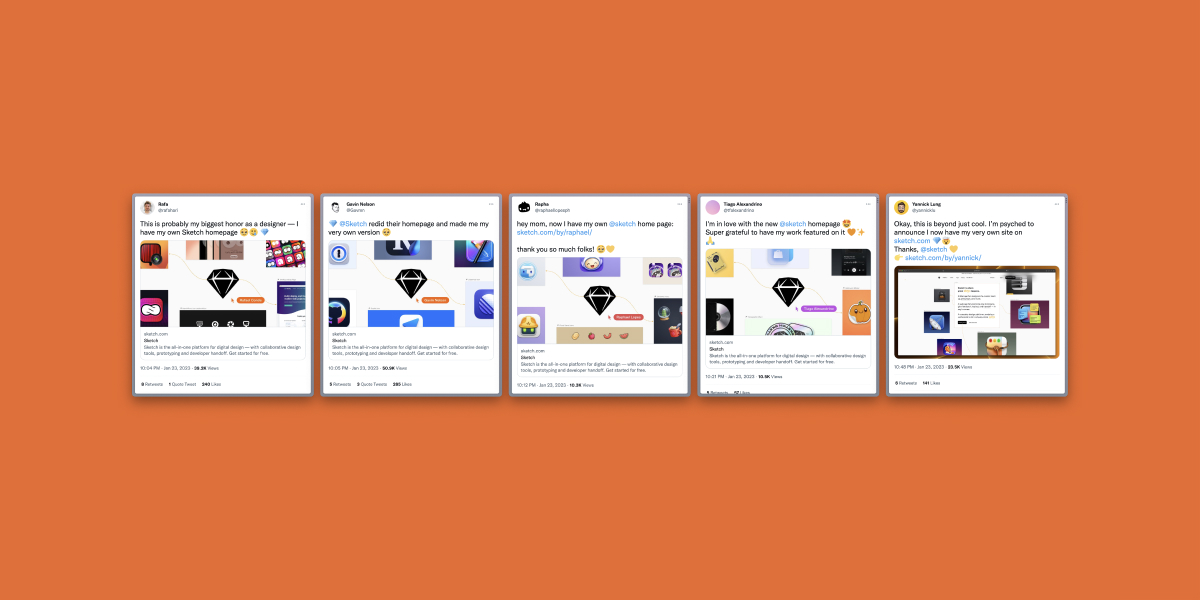 The Subtle Art of Celebrating Your Customers

How to write a better case study that people will be excited to share, because it makes them the hero.

No one's going to be as excited over your redesigned website as you. Pour all your energy into it, craft a singular homepage that takes the design leadership baton from Stripe and Linear, and you'll get kudos for a day or two, perhaps get mentioned in design blogs, and then it's back to the grind. No one other than your team—not even your best customers—will feel ownership and pride in its launch.

That is, unless you include them.

Which is the genius of Sketch's site redesign. How do you break out of your rival and their $20 billion acquisition's shadow? How about letting your best customers—and their work, especially—speak for you?

That's how I noticed the new Sketch site. I saw first one tweet, then another, from designers mentioning how excited they were to have their own Sketch site. That's enough to spark your curiosity, click through, and discover a redesigned Sketch homepage that contained multitudes. The default page featured a random scattering of designs—a nice redesign, but nothing that surprising. That is until you click through the tweets and realize there was literally a homepage for each featured designer. A homepage of icons from Gavin Nelson, of illustrations from Viviane Valenta, of landing pages and app designs from Rafael Conde. Real work signed by real designers, who just so happened to use Sketch to bring their magic to life.

And so could you, the site hints, without having to share numbers or forced quotes about why these designers chose to use Sketch.

It's easy enough to imagine some of Sketch's superfans—even, perhaps, some of those featured in this campaign—tweeting about their redesigned landing page. But it's hard to imagine designers being this excited about a traditional case study or a single featured design, excited enough to drive Tweets that got hundreds of likes each and (according to Twitter's new view stats) over 180k cumulative views within the first day. It's not every day that your customer would say "This is probably my biggest honor as a designer" about your site.

No one reads case studies. Not for fun, anyhow, not as something they'll read on the train home from work and Tweet to their followers, not enough to drive hundreds of likes. Case studies are dry, white pages filled with data you know was picked to make the featured product look good. Of course a megacorp was going to pick a software giant's offering.

But someone, you could imagine, could get promoted or land a high-paying client while using Sketch, if using it could help you make designs as great as those featured on the new sites.

Imagine if Sketch got designers to tell them how many hours they saved using Sketch instead of Illustrator, or how their team had "streamlined operations" and "enhanced collaboration" by ditching files for connected designs. It's not hard to imagine a half-dozen examples of real work built in Sketch making a better case for buying the app than a half-dozen forced quotes.

I've found, over years of interviewing people for podcasts and blog posts, that it's easiest to schedule a call when someone has something they want to promote. When an author's book is hitting the press or a developer's app is waiting for Apple's approval, they'll be excited to talk. It's not about you: They've got something to promote, and they're happy to talk about it. It doesn't take much prying to get them to share details; they have all the talking points in their head, ready to be quoted. And you, in turn, get the chance to help tell their story.

People want to tell their stories. Not the story of them using your product, but that they were here and did this thing and lived to tell the tale. Your product was along for the ride.

Red Bull gives you wings, they say, so they sponsor folks willing to jump off mountains and out of balloons, people who already were going to try to fly and, perhaps, drink Red Bull while they were at it. Better to show off what they achieved than to dive into the details with a case study about the benefits of vitamin B.

Folks who use your product are superheroes, in their own way, quietly making their workplace or home a better, more successful place while using your product. And sure, they could tell you stats if you asked for them, and try to quantify what your product means to them.

But your product means something to them. It was right there with them when they built the thing they're proud of. That's what matters, to them, and what will resonate with others.

Your product doesn't have to be perfect; sometimes the imperfections are endearing. But if you can find those people who find your product meaningful, who are using it every day because they want to, and you can celebrate them, cheer their work, you've got a much better chance at making their day—and they, in turn, yours.

How to leave Twitter behind and start a new community—or bring your existing one—on the Elephant Network.

Learn Markdown, for good, in a one-week email course