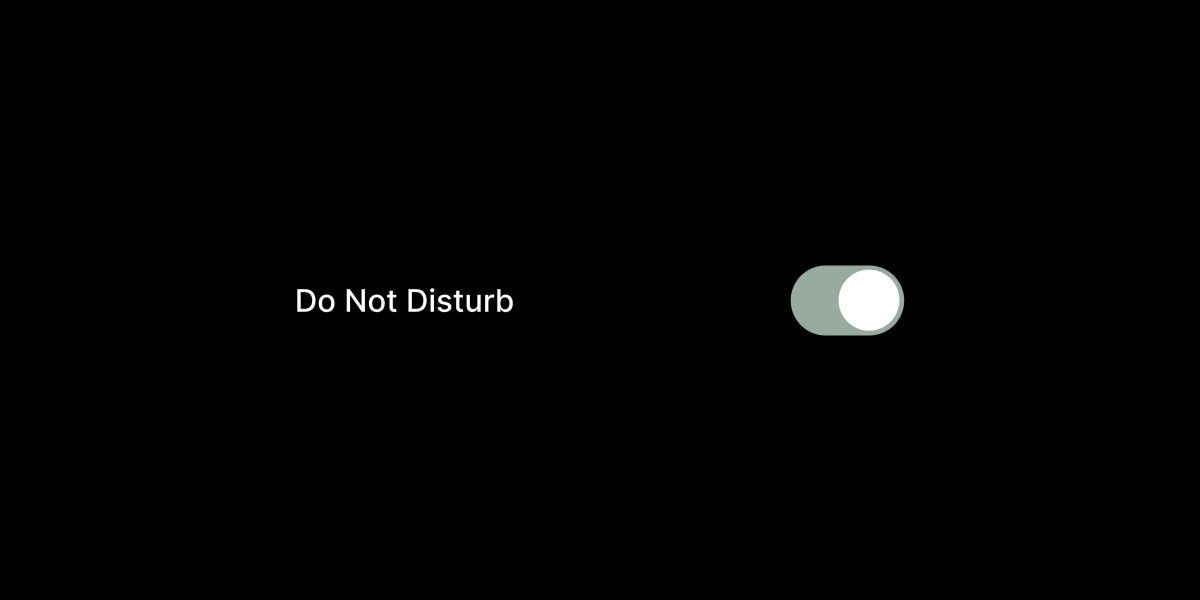 We need a do-not-disturb mode, for collaboration.

The best collaboration comes in spurts.

You’re finally focused, typing, pouring everything in your mind onto digital paper, writing the thing you’ve put off ‘til the last minute. You’re in the flow, or something approximating it. A few more hours of this, and the fear of missing your deadline will be long forgotten.

Then Anonymous Manatee—or, worse, your boss—pops up in the toolbar. Their cursor flashes, now highlighting a phrase, now clicking a few paragraphs down.

They’re watching you, and you freeze. It’s not like sentences flow fully formed from your keyboard. You type, haltingly, backspacing and retyping, foraging for the right word, the perfect wording. And now, it’s like you’re performing for an audience. You didn’t prepare for this. You needed quiet time to focus and finish, not a crowd to cheer you on.

“Am I the only one who writes an email, then revises it for tone and clarity?” wondered Chris Danner on Fast Company about Google Wave, an ill-fated notes-plus-chat app that shared every character as you typed it. “It’s creepy enough that other people know when I’m typing on Gtalk. Now they can see what I’m thinking as I try out sentences?”

Sometimes we need space to think, safety to experiment. We can throw the doors open once we’re ready. There’s a time for collaboration—just not yet.

Stray notifications popping up in Zoom calls are only a symptom of a broader issue, that our computing devices blur any remaining distinction between our work and real lives. That’s fine when you’re in the office, working on your own, when your computer is actually personal. It’s not so great when you hook that personal computer up to a projector or share your whole screen on Zoom, and forget to pause notifications.

So Windows added Focus Assist settings, and Apple built in a Do Not Disturb mode to Mac and iOS, to keep notifications at bay at least for an hour. They're smart enough to turn off notifications, automatically, when you connect to a projector or open Zoom, if you take the time to train them.

But that’s when you know you’re performing, when you’ve asked people to show up and look at your screen. You're presenting, sure, and don’t want your grocery reminders and news updates to distract your audience and spill personal secrets. But it’s also something you could prepare for. Focus modes are nice, but are just an automated version of the digital sanitization of killing apps and notifications that you could have done on your own before presenting.

The scarier scenario is when people just show up, right while you’re in the middle of working, and there's no way to kick them out.

Once you’ve shared a document with most collaboration tools, though, or started writing something in your team notes, anyone can pop in, anytime. You could turn off your wifi, perhaps, but they could still see the in-progress piece as you last left it. And it could be worse: Some remote work tools to replicate the office experience bring people into your personal computer all day long. Early ones like Sqwiggle snapped a photo every so often so you could wave and say hi. Newer ones like Perch and Tandem offer always-on video, with Sidekick going further with a dedicated screen for video. Yet even then, you could quit those apps, put tape over the camera, or step away for a minute if needed. And at least you know you’re working on camera. The more jarring thing is when you think you're private, that is, until an avatar pops up in the toolbar.

A time and a place

That’s one of the enduring allures of offline writing apps. Quiet. You’re alone with your thoughts, free to make as many mistakes as you like. You can write anything, crazy things, rewrite your intro a dozen times if that’s what it takes to conquer writer’s block. You can work until the draft’s together, ready to share if not with the world, then at least with your team.

Then you copy it into your team tools, your notes app or Google Docs or wherever your team works to edit work. And then, you’re excited to see others’ avatars pop up. The moving cursors don’t bother you anymore; you’re ready for the next step.

It’s like coding, where you work on a bit offline, tweak until it’s running ok locally. Not perfect, perhaps, but good enough. Then you commit to GitHub and pull it together with your team’s contributions, and iterate from there. Offline, then online, then off again.

We need tools and workflows that understand that interplay, that let you dip in and out of collaboration.

We need a do-not-disturb, for collaboration.

For now, there are workarounds. You can write on your own first, in an offline app or a non-shared document or notebook in your collaborative tools—and only share once you want others to come in. You could even un-share a document—though you’ll then have to re-invite people back in, which might be more hassle than it’s worth. That is, until the future arrives, and focus mode comes to shared documents, too.

Google Wave did too much at once, and maybe that’s why it never took off. But perhaps its true cardinal sin was oversharing. It didn’t make you feel safe creating; you needed to be perfect from the start, every time.

And to feel safe, sometimes you need to be alone.

Longform is good. So is shortform.

Microsoft and the art of distributing something new.

Full-time employment is leveraging your employer's distribution. So is writing for a publication, recording under a label, releasing software in a bundle, or making the first app for a brand-new platform.