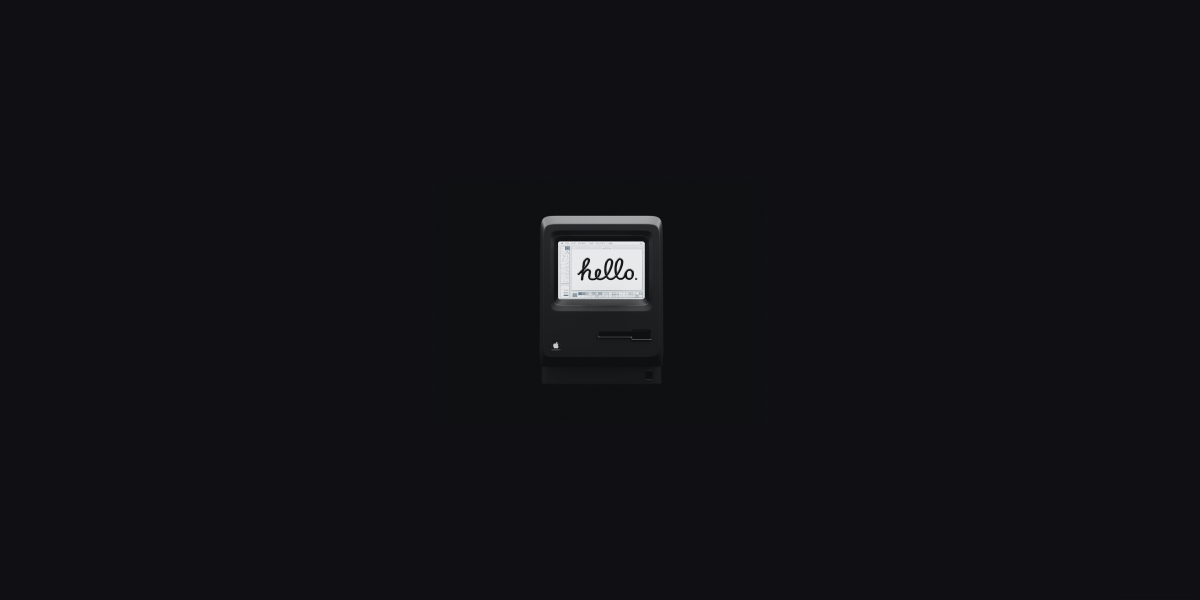 The Canon Cat and the Mac that Steve Jobs killed

Imagine an original Macintosh, a beige box with an oversized chin and offset floppy drive. A friendly little machine. You sit down to draft a letter, tap the keyboard to rouse the Mac from its slumber, and discover the Mac is running a word processor.

That was Jef Raskin’s dream for the original Macintosh. “Apple’s products were, in many ways, difficult machines to explain to customers,” wrote Raskin after starting his career at Apple writing user manuals for the Apple II. He dreamed in his Book of Macintosh of a computer for “the Person In The Streets,” someone who could use a computer and still take “perverse delight in being able to say: ‘I don't know the first thing about computers.’” Your average person walking down 5th Avenue, a Kramer or Costanza, that’s who Raskin had in mind.

It’d be as easy to use as a toaster, this computer Raskin wanted to build. “When you want to set down an idea, you should be able to go to your computer… and just start typing: no booting, no opening the word processor, no file names, no operating system,” Raskin reminisced years later in The Humane Interface.

Such a computer would be a black box, an appliance the average person would never open. “A predictable, documentable system must be entirely under Apple’s control,” Raskin envisioned, “one which will be profitable to sell, service and provide software for.” A widget, the simplest device possible. “You get ten points if you can eliminate the power cord,” an early design exploration suggested. It would be a break from the Apple that Woz designed with its freewheeling, expandable, breakeven past, to the walled gardens and consistently-high profit margins for which Apple became known.

“Computer problems are not like the weather: We can do something about them,” said Raskin, and did.

And the solution was a word processor.

The Mac that never was

Computing may be powered by 1’s and 0’s, but that’s on the inside. Words are how most of us interact with computers; even coding, today, is telling computers how to run, with words.

“An interface (which Raskin defined as ’The way that you accomplish tasks with a product’) is humane if it is responsive to human needs and considerate of human frailties,” wrote Raskin in The Humane Interface, his manifesto on how an ideal computing system should work. To Raskin, our human needs revolved around text. We want to write (in text), crunch numbers (text, again), communicate (yup, text), and code (esoteric text, but text all the same). That was the most you could expect of computers in the ’80’s. Three decades later, it’d still be the rarest of days if you touched a computer and didn’t interact with text at all.

Computing for the rest of us, that’s what Raskin set out to build. If text is how we compute, he’d build a computer for text.

Yet how do you define better? New doesn’t necessarily equate with better; the shine wears off after a while. Productivity—getting more done in less time—is what separates the good tools from the great.

“Productivity is improved by our being able to spend less time doing a task,” surmised Raskin.

Software design often approaches productivity from the opposite perspective, from that of the computer. “Since humans are more pliable than computers,” Raskin quoted novelist Karla Jennings, “it can be easier to make a human fit the computer's limitations than to design the computer to fit the human's needs.

“When that happens, the human becomes a prisoner trapped by the computer rather than liberated by it.”

So we spend our days tweaking settings, backing up data, switching contexts, and getting distracted by our shiny digital overlords. The very tools we bought to boost our productivity would sap us of it.

Raskin reached back to science fiction to dream up a better computer, borrowing Asimov’s laws of robots to define laws of computing:

“The first law of interface design should be: A computer shall not harm your work or, through inaction, allow your work to come to harm.

“For a second interface law, you could do worse than to insist on this one: A computer shall not waste your time or require you to do more work than is strictly necessary.”

A computer built to help humans accomplish their needs in less time, that will not harm your work or waste your time. Not a bad place to start. That core theory, combined with a focus on the singular need to edit text, led Raskin to build features that today’s software would do well to replicate, features to:

Habits tied his dream interface together. For “humans cannot avoid developing automatic responses,” said Raskin. We’d learn an interface, no matter how terribly designed, thanks to repetition. We remember weird keyboard shortcuts and the paths through our car dashboard’s confusing UIs by repetition; change them, and we’re left stranded. Worse still, “you cannot undo a habit by any single act of willpower,” said Raskin. We’ll keep pressing the wrong thing we’ve memorized until, with time, the new habit slowly overtakes the old one.

“We must design interfaces,” he deduced, “that (1) deliberately take advantage of the human trait of habit development and (2) allow users to develop habits that smooth the flow of their work.”

Raskin’s ideal computer would do this with two dedicated Leap keys, dedicated to search. Type something and hold the left Leap key to jump back to the previous mention of the term; tap the right Leap key to go to the next mention.

Raskin asked designers to think through the habits they were helping users build. How can you make humans productive, help them accomplish their tasks in fewer steps? Simpler computing would make everyone more productive, and the effect would be multiplied once we turned those simpler steps into habits.

“No matter how complex the task a product is trying to accomplish, the simple parts of the task should remain simple.

“Complex tasks may require complex interfaces, but that is no excuse for complicating simple tasks,” said Raskin.

Humans might turn those complicated steps into habits already, but we have better ways to use our time.

“The best way to differentiate your product’s interface,” wrote Raskin, “is to make it work.”

An Apple versus a loose Canon

Raskin’s “articulate vision of an exceptionally easy to use, low cost, high volume appliance computer got the ball rolling,” wrote Andy Hertzfeld in his Folklore stories about the early days at Apple. But the Macintosh was destined to greater things. Where Raskin wanted a better device for text, Jobs imagined a “bicycle for the mind,” a computer that could introduce itself, a tool to create anything you could dream up. The Macintosh, as envisioned by Raskin, was “just a machine that wouldn’t have sold,” Jobs told author Stephen Levy for his book Insanely Great years later.

“It was just going to be a word processor initially, that was Jef's original concept,” recalled Jobs. “But by the time you really got it to be a good word processor, it was very little more money to make it a great whatever you wanted to do” machine, a computer that could do anything you wanted.

So the everything machine won out over the information machine and thus the Mac was born.

Steve Jobs “would have made an excellent King of France,” opined Raskin to Time Magazine, frustrated by Jobs’ dictatorial rule and his insistence on a new direction for the Macintosh. The two men wanted to create something great, but they each defined greatness differently.

Raskin decamped to Canon and built his ideas into the Canon Cat, complete with a built-in keyboard so the only thing to connect was the power cord. And, true to his vision, it was built around an all-in-one writing app—an early Notion or Coda or OneNote, of sorts—with documents and tables and computation in one continuously expanding file. You’d tap a key and start writing where you left off, even if you were writing something new. You could always search and find the stuff you wrote yesterday, later. “The Cat represents an eye-opening new approach to data storage and retrieval; it will surprise anyone who thought that interface design was a dying art,” wrote Ezra Shapiro in a BYTE magazine review.

“The Canon Cat was popular with professional writers,” shared Hanhwe Kim, who worked with Raskin in the early 2000’s to try to resurrect some of the Humane Interface ideas. “10,000 Canon Cats were sold the few months it was available;” hardly an insignificant number, to a startup at any rate. Maybe Canon gave up too quickly, put too few marketing resources behind it.

Or maybe, the world wasn’t ready for yet another interface. “One of the difficulties we had is overcoming established ‘standards’ that have become familiar,” recalled Kim. “So when a device implements an interface that is radically different like the Canon Cat, they have to be really REALLY good to convince people to take the effort to learn to use.” That was too high a bar for a machine that cost $1,459 (in 1987, no less), no matter how thoughtfully it was designed.

Convergence devices—computing tools that’d do whatever you could dream up—were what made Jobs and Apple rich (the iPod aside). And yet. It’s hard to read Raskin’s ideas and not see his influence in Apple’s Human Interface Guidelines, to see his vision and not wonder if it could have taken off if the Cat had come a bit earlier, or if it’d been built as a dedicated writing app instead of a full operating system. His ideas are reminiscent of Ted Nelson’s Xanadu, of Vannevar Bush’s 1945 dream of a tool to help us think. Bush, Nelson, and Raskin were ahead of their times, in their own ways. They envisioned today’s multifunctional notes apps, personal zettelkastens, and reimagined wikis, decades earlier when the world was happy to play with MacPaint.

And they’re a reminder that today’s computers and software aren’t perfection, that computing in another timeline, a different future, could still be different. That Raskin’s computing rules could still make software better today.

There are, there can still be, better ways to compute.

The Friday Update: On journaling to get things done